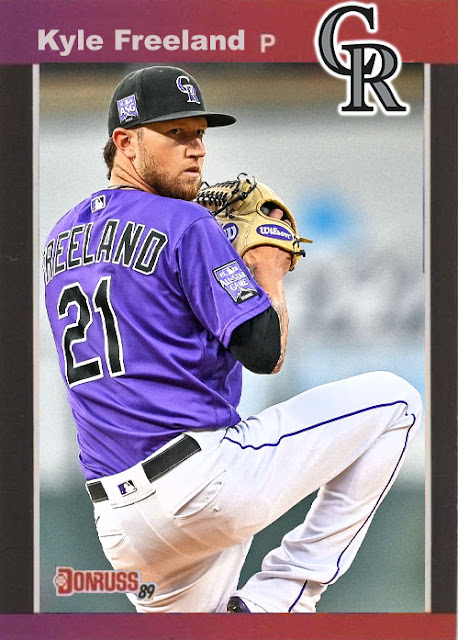 One of the interesting things about the Rockies is that even after the sort of dissolution of the core of the competitive lineup, the starting rotation continued to stay pretty much the same, only really losing lower pieces like Tyler Anderson and Jeff Hoffman. With the exception of Austin Gomber, netted in the Arenado trade, the Rockies' rotation of Kyle Freeland-German Marquez-Jon Gray-Antonio Senzatela-Chi Chi Gonzalez has been the same since 2018.

I mean, you think that some of these guys would have changed hands by now. Marquez has been a trade target for the last few seasons, Freeland could have gone after 2018, and Senza was hot last year. And yet they're all still here, and they're all in decent condition. Marquez and Gray have had the bigger years, but Freeland is slowly rebounding into his former self, with 81 Ks and a 4 ERA. I do think he's going to really need to pull something together soon in order to keep from being a one-season wonder, but he's not terrible. Senza is even beginning to have some nice starts lately, and is slowly lowering his ERA. But currently, Marquez and Gray are the big guns, even if Gray is currently hurt. And Gomber is slowly moving towards their caliber, with a decent season under his belt.

Hell, there's also been some fine activity from C.J. Cron, bringing in some much needed offensive production and boosting his 2021 resume. And you're also seeing people like Connor Joe, Brendan Rodgers and Elias Diaz step into the ring with some decent action. So while this team isn't anywhere near contending, they're also definitely not a completely awful team, and there's a lot of promise left.

Which begs the question...for the offseason, do the Rockies split up the rotation and fully commit to tanking for a few years, or do they try to work their way back up the division with this lower-budget core? True, a lot of this plan would involve the majority of this team to repeat success next year, and this would need to happen without Trevor Story, who will likely be signing somewhere depressing during the offseason [way-too-early guess? Angels], but...with the right moves, this Rockies team could be a sleeper hit next year.

It's a long way off, and it probably might be too crazy to happen, but there's this slim chance of them turning it around in 2022. I fully expect to be wrong, but...stranger things have happened.

Coming Tonight: A catcher who will likely be out of a job next season.