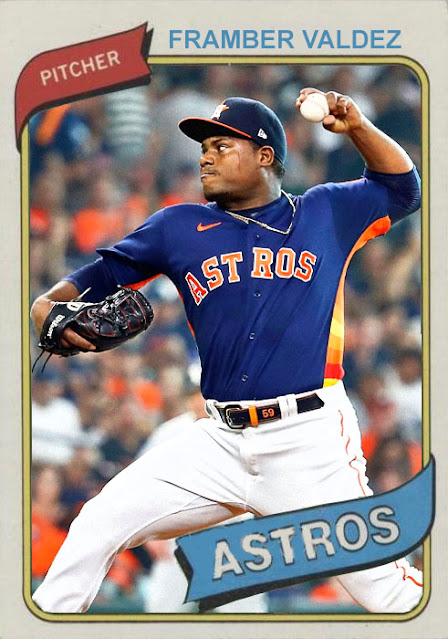 More fun with the infuriatingly good Houston Astros. As we hurtle towards a White Sox-Astros ALDS, the optimism that the Sox could potentially take these guys is beginning to fade slightly.

Like...there just aren't many problems with this team, at all. We thought there was gonna be an issue with center field once Myles Straw left, but now they just threw in Jake Meyers, and now HE'S batting over .300 with decent power numbers. We thought Zack Greinke's injury would hurt this team, but McCullers, Valdez, Garcia and Urquidy are providing strong starting material. The team has 5 guys with more than 70 RBIs, three starters with .300+ averages, and 2 guys with 25+ home runs. The balance between power hitting and contact hitting is well-aligned, even allowing a .199-hitting Martin Maldonado to still retain a job there.

And if there wasn't a cloud of past cheating over this team, a lot of what they've done this year would be respectable. Carlos Correa may have just had the best season of his career. Yordan Alvarez established that his rookie season isn't a fluke and that he can continue to be a league-best DH. Luis Garcia and Lance McCullers are having awesome seasons on the mound. Ryan Pressly is still a great closer, despite only sporting 23 saves at the moment [again, if the team's blowing everybody out, not many save situations]. This is a very good team, one that's a definite favorite for the postseason, and a major figure in the story of this season.

But, like last season, no one wants them to win anything.

And right now, the most likely ALCS situation is Astros-Rays. Yes, the White Sox could outdo Houston, and yes, the Wild Card team could upset the Rays, but...right now, the best two teams in the AL are the Astros and Rays. We...just got a Rays-Astros ALCS last year. It was kinda boring. These are two consistently good teams that aren't the most interesting ones to get to the end. If the White Sox, Red Sox or even somehow the A's were to get there, then it'd be kinda cool, cause those guys are less ubiquitous and aren't as consistent.

You read that right- I'd rather the Red Sox make an ALCS than the Astros.

[I didn't mention the Yankees up there because I'm being nice to you guys.]

So as good as the Astros are, they're the most boring pick for the ALCS cause they're always there. The Cardinals used to do this, now the Astros have, cause they always make it. I just like some variety. At this point, though...I don't know if they're gonna allow anyone else to take it.

Coming Tomorrow- Sometimes, just not allowing many runs at all for most of the season is a stat that doesn't really hit you until LATE in the year.