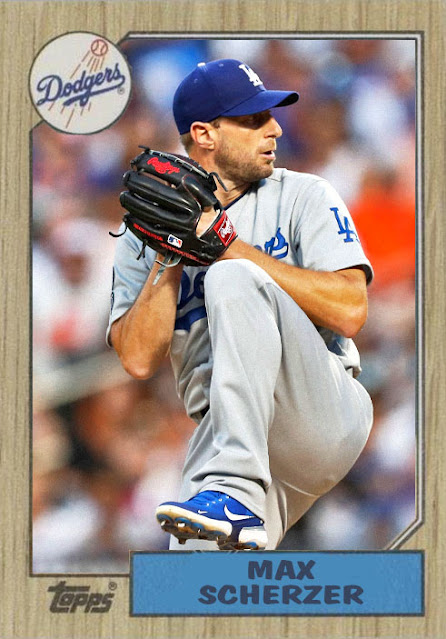 He wanted to compete again. And so he is.

Max Scherzer pitching for the Dodgers has basically been thought of as their killswitch. And so far, Scherzer has been lights-out in LA, with 7 wins, a 1.43 ERA and 85 Ks in 10 games. Adding this to his Nats numbers give him stats that still fit him into the Cy Young race, even though teammate Walker Buehler and Phillies hurler Zack Wheeler would still like to add their first rather than Scherz' fourth.

But...even at 37, Max Scherzer is giving peak numbers, and is in a rotation alongside extraordinary performances by Walker Buehler, Julio Urias, Clayton Kershaw and Tony Gonsolin. Urias has an outside chance at becoming a 20-game winner next week, especially if he wins today against the D-Backs. Jansen has another 30-save season, Muncy has another 30-homer season, and Turner and Smith have 25-homer years.

And yet...even as the Dodgers come close to their 100th win [I'm writing this Saturday morning], they are still looking at a wild card spot. 2nd best team in the league, better record than any other division leader, and they still have to play 1 game against the very dangerous Cardinals to advance to play the Giants. Because the Giants are just that good this year.

Which also means that, despite all the Dodgers' dominance this season and their insane heights over the course of the year, they may not even have a proper chance this year. And even if they do make it past the Cardinals for the wild card spot, they'll still be coming in at 4th seed, and will have to play the Giants, despite having a better record than both the Brewers and [NL East division leaders]. That's kind of mismatched, and a little unfair. But hey, this is how the structure works, and Manfred's probably gonna widen the playoffs next year anyway because he wants to give the Astros and Cardinals more of a chance.

The bottom line is a team as good as the Dodgers shouldn't have to go through this many hoops in order to prove that they can compete again, and they have a good chance of losing before they can even defend their throne, even if they're arguably the more deserving playoff team in comparison to the Giants.

But, with that rotation, and with enough tools to keep them going, they have more of a chance than the average wild card team, and they could potentially make another World Series this year. Especially if they keep putting Mad Max on the mound.

Coming Tonight: Perhaps the wisest move the Yankees made at the deadline. And no, it's certainly not a Luis Cessa Reds custom.