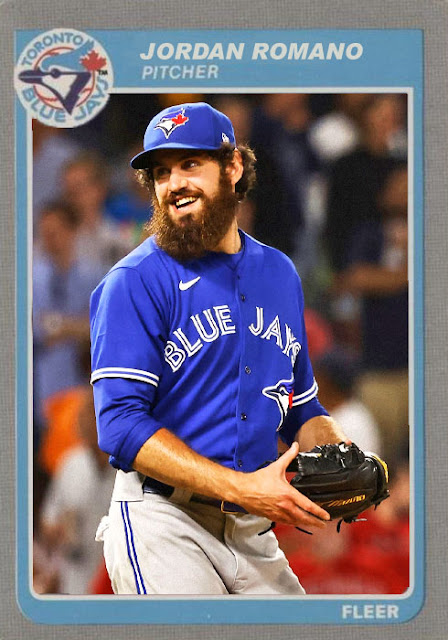 Well. We are in the midst of a Blue Jays-Yankees series that honestly might not matter.

I mean, yes, it will help the Jays stay in the race if they win a few games [as they are doing right now], and it will definitely help the Yankees secure the playoff position if they win some more. But...this is not one of the series' people are glued to right now. People are watching Orioles-Red Sox to see if the Sox slip anymore, and they're watching Oakland-Seattle to see if the Mariners creep up anymore.

The Blue Jays still have the slightest chance of making the playoffs, but now some of the biggest assets of the season, including Hyun-Jin Ryu, Ross Stripling and Randal Grichuk, are slowing down. Even Vlad Jr. has backed off, letting Marcus Semien and Robbie Ray lap him in the WAR category. And while Semien's season is also pretty incredible [he hit his record-breaking 44th homer as a second baseman tonight], Vlad isn't quite as at the forefront as he was in the heart of the season.

Which isn't to say the team is weak. Jordan Romano, Lourdes Gurriel, Alek Manoah and Corey Dickerson have pulled ahead to carry some freight during this stretch of the season. Romano is the closing option this team has landed on after losing Kirby Yates, Julian Merryweather and Rafael Dolis, and he's been impressive as hell, with a 2.24 ERA, 81 Ks and 21 saves in 60 innings.

But...the odds are not in the Jays' favor. They're third in line for the spot. Of the contenders, the Mariners have the most momentum, and the Sox have the easiest schedule. The Jays are also dealing with peak Yankees right now, and that's already cost them one game. I could be really wrong, but I don't see the Jays breaking into the last spot, and even if they do, it will be difficult for them to get past New York and eventually Tampa. So as 'feel-good' as this team has been, and as promising as this youth movement has been...2021 may not be the year it develops.

Coming Tomorrow- The last two seasons he was among the best pitchers in the league. Now he's one of the Nationals' last lines of defense.