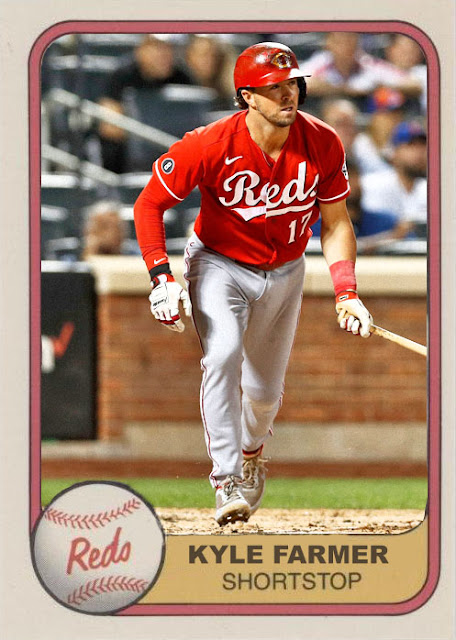 Of the teams that made the playoffs in 2020, seven will not be returning to compete there in 2021. And in all the heartbreak, of teams like the Athletics, Padres and Blue Jays, who were all ALMOST THERE...perhaps the most sad omission from the playoff picture was the Cincinnati Reds. Who were within inches of a spot, and then the Cardinals came in and bulldozed past them.

The Reds are a rare team, in that their top four players, according to WAR, are all starting pitchers. Not three, Milwaukee. Four. And #1 is Wade Miley, which still is baffling to me. Is Wade Miley, at 34, slowly turning into the next fun veteran fringe pitcher, in the tradition of Bartolo Colon, R.A. Dickey and Rich Hill, right before our very eyes?? How cool is that? Guy from the Louisiana swamps with an incredible Hulk arm tattoo, hero of Cincinnati. You love to see it. But Miley, Tyler Mahle, Luis Castillo and Sonny Gray are the four best players on this team statistically, without even factoring in the two All Stars [Jesse Winker and Nick Castellanos], the Rookie of the Year [Jonathan India], and Joey Votto [Joey Votto.

And that's not even mentioning the fact that the fifth starter, Vladimir Gutierrez, is also pretty damn good, with a 9-6 record in 22 starts. And also, they just brought up this kid Reiver Sanmartin who started yesterday and held the Pirates to a run over 6 innings. So this rotation is looking better than it has in years, and it's one heck of a trend to start.

But also, this lineup took shape in 2021, and so many little pieces came into place. Tyler Naquin, the streaky king, had so many amazing drives this year. Kyle Farmer had a huge July, and has secured a place as the starting shortstop. Tyler Stephenson was beautiful as a backup this year, and made a serious case to replace either Tucker Barnhart or Joey Votto down the line. Delino Deshields Jr. and Max Schrock have been surprisingly awesome off the bench. And this T.J. Friedl kid sure packs a punch.

So even if 2021 seems to be a wash for the Reds, it's definitely a sign of big years to come. With Nick Senzel back next year, and with a little bit of roster space sure to be cleared [I say Barnhart's on the way out, maybe even Suarez too], this team could get even stronger, and be even more of a threat in the NL Central.

Maybe I just want this so the Cardinals aren't the spoiler next year, but...wouldn't the Reds making a serious playoff run in the next few years be awesome? It'd be so much fun!

Coming Tomorrow- One of the other great teams that missed the playoffs this year, and a great pitcher from it.