The Cardinals Have a Shot, or Please, Think of the Children 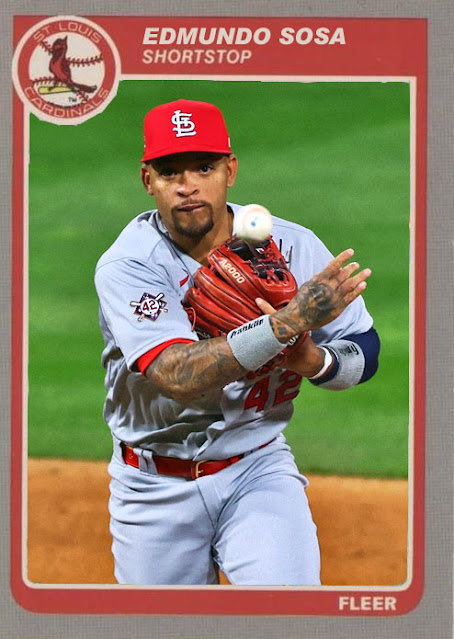 The NL Wild Card Race...is still very much a moving item right now, mostly because a number of losing and winning streaks have lined up together. So even if there's one wild card spot that's very much reserved for the Dodgers...the last one has become a five-team free for all.

Granted, the two contenders that have been there all season, the Padres and Reds, are still there and leading, and currently tied for the spot. But the Phillies and Mets have caught up, and also...a team that was counted out a little while ago is now one game behind the two leaders.

And because it's September, and I'm never allowed to enjoy myself...it's the Cardinals.

I would love it if the Cardinals would just go away and not compete for a long period of time. I know this is what you all say about the Yankees, but the Cardinals just never get the hint to stay down. They remove themselves from the conversation, then by the end of the year they've hung around and can sort of waltz back into it without anyone objecting. The Cardinals have been pulling this shit every few years for the last decade or so, and sometimes it catapults them into the NLCS.

We don't need the Cardinals to come in and start winning when there's absolutely no need for them. We already have the Astros for that.

To their credit, the Cardinals do have a halfway decent team this year. It's a lot of elder-statesmen types, like Paul Goldschmidt, Yadier Molina and Adam Wainwright, who are leading this team, but also some homegrown types like Harrison Bader, Tommy Edman, Tyler O'Neill and utility infield standout Edmundo Sosa. There's some versatility, some surprising heroes, and some nice depth. Granted, not everything has worked. Jack Flaherty has been injured for most of the season, Paul De Jong has seemed lost without former battery partner Kolten Wong, Lars Nootbar has been only serviceable as a bench bat, and trusted veterans like Miles Mikolas, Andrew Miller and Jon Lester have all struggled this year.

So it's not a perfect team, but it's a very fortuitous, streaky team. This week, they have to play 2 Wild Card contenders, the Mets and the Padres. I feel like they have enough momentum to ground the Mets a bit, but I don't think they'll get past the Padres, who...yeah, I'm thinking might take the last wild card spot. I appreciate the Cardinals' determination and drive, but I just don't think they have a place in this construct this year. Especially if it leads to a 1-game playoff against the Dodgers.

Just watch, I just gave the cosmos permission to give me an Astros-Cardinals World Series. Wonderful.

Coming Tomorrow- An acquired starter for a team whose wild card status has shifted slightly but isn't completely dead yet.

Posted by Jordan at 7:50 AM
Labels: Cardinals, Could this seriously be happening?, Custom Cards, Edmundo Sosa, woe is me