The Eternal Streakiness of Tyler Naquin 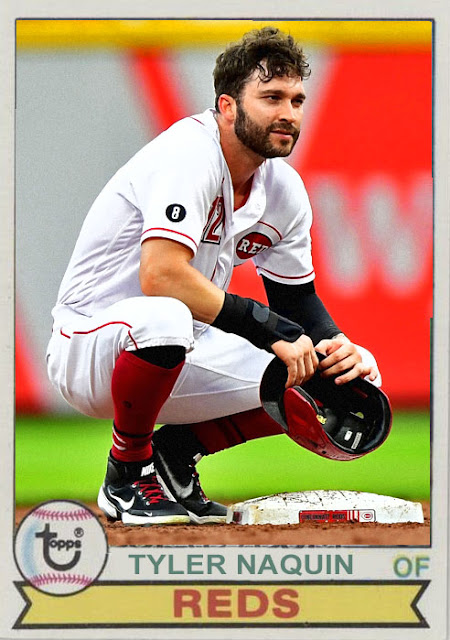 There was a very funny clip earlier this year of the very Canadian Joey Votto debating the pronunciation of new teammate Tyler Naquin's name. The consensus, and Baseball Reference, said it was Nay-kwin. But the ever-French Votto seemed utterly convinced it was Nuh-kain. To the point of chuckling, he was absolutely certain that his new teammate had a French name. He didn't. But who are we to argue with Joey Votto?

The reason Votto was talking about Naquin to begin with was that the first week of the season was absolutely huge for the latter Red. He hit 14 RBIs in those first 7 games, with 5 homers and a .333 batting average. Then, of course, he came back to earth, and would spend the next few months bobbing around .260, striking out, and ceasing productivity for a little while. But every so often he'd have another big week, followed by an off month or so. In August he has a 17-game hitting streak, a very big deal for Cincinnati, especially during an upward stretch for them. And while his place in the batting order has fluctuated between 2nd and 8th numerous times this season, he's still very much a part of this competitive Reds team.

The bottom line is that, like in Cleveland, Tyler Naquin is streaky as hell. It's a known fact, you've just got to learn to live with it. At his best, he's been a team hero for the Reds. At his worst, he's been a mid-level decent guy who can leave in the 7th so that Akiyama can get some reps.

Again, one of the best things about the Reds this season is the versatility. Anybody can have a big moment. Joey Votto can have a home run streak. Vladimir Gutierrez can join the already crowded bullpen. Wade Miley can become the best player on the team. All in the name of getting a team that's had rotten luck lately into the playoffs. And with Castellanos, Winker, India, Mahle and, yes, Naquin all playing well right now, I sincerely hope it does happen.

The big issue is that the Padres have caught up, and have played two less games than they have, so they're currently in the wild card position again. The Reds need to absolutely crush things in the next few weeks, and push their way back into the picture. Again, the Padres making the playoffs is something the sportswriters predicted. The Reds breaking in would be insanely cool, and would make a lot of people happy. Please let it happen.