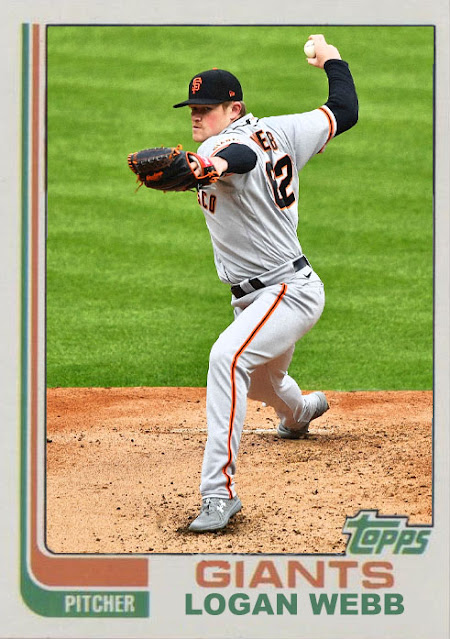 The five top performers during the Giants' comeback 2021 season may not be the ones Giants fans were thinking. Okay, maybe they could have guessed Brandon Crawford, and maybe they would have figured Kevin Gausman would have another strong year, but...Disco coming through immediately? Darin Ruf rising to the top? Logan Webb outdoing Cueto and Wood? That's a lot harder to see coming.

Logan Webb, after struggles in previous years as a starter, managed to capture the league's attention recently for his cumulative stats, like...barely allowing many runs per start, with a 2.64 ERA and 9 wins. The season may have been ruled by people like Gausman and Disco from the start, but Webb was consistent, staying under the radar and providing great starts the entire time, to the point where once September rolled around, his consistency and stats stood out more.

With Cueto and Wood injured, the Giants may have to make some close calls to round out the rotation [looking like Sammy Long and Jose Quintana]. But that top three, of Gausman, Webb and Desclafani, is strong, and in a very unassuming, underrated way. People are throwing the Brewers rotation, the Dodgers rotation forward as the titans to beat in the NL. I honestly think that Giants trio is right up there with 'em, and could get a lot done in an NLDS situation.

This is also a really versatile, strong team. Kris Bryant has improved the lineup. LaMonte Wade Jr. has become an underrated outfield bat with some incredible range. Mauricio Dubon and Tommy La Stella are trading off at 2nd, both giving relatively nice results there in place of Solano. And the foundation of Posey, Crawford, Belt, Longoria and Yaz has held.

They're only a few games ahead of LA, and will need to hang on for the rest of the month in order to get the top seed...which could, potentially, lead to another Giants-Dodgers matchup in the NLDS. Unless, of course, a lower wild card seed sneaks in. So they do need to work on stating with certainty that they're better than the Dodgers, and proving it with receipts.

Coming Tonight: A closer who just saved his 300th game. Hopefully his team can reward him further.