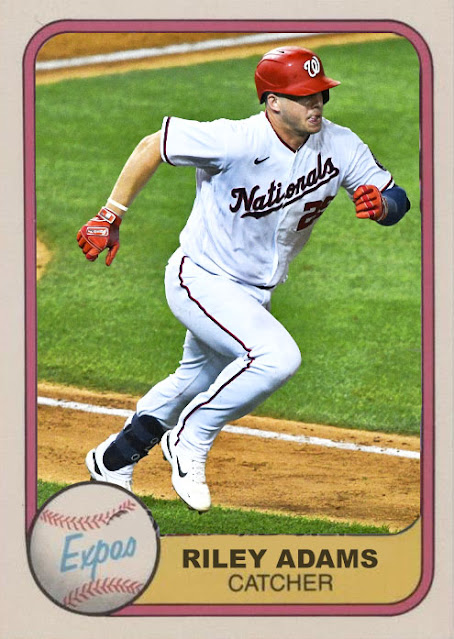 How bad must Tres Barrera feel right now? Going into the season thinking he'd get some time as a backup once Avila got hurt, and now the Nats are playing Avila, Keibert Ruiz and Riley Adams instead of him. Poor guy. He probably thought he'd be the Nats' 2022 catcher.

I kinda had a feeling that Riley Adams was gonna be good for somebody while he was in Toronto. He was not only stuck behind Danny Jansen and Reese McGuire, the STILL-quarreling catcher platoon, but he was stuck behind Alejandro Kirk, who seemed like an heir apparent at backstop already, AND the heir apparent to Rowdy Tellez at DH. And he was doing decently in his brief time in the majors. So I figured something would happen and he'd get time somewhere. Something did happen, he was traded for Brad Hand, a guy who isn't even with the Blue Jays anymore.

So...essentially, the Blue Jays gave Riley Adams to the Nats for free. Which makes his sudden rise all the more painful for the Jays, especially if they miss the postseason.

Adams has been a strong starting catcher in Washington, boosting a depleted lineup with a .292 average and 10 RBIs in 29 games. Things have calmed down after his first 2 weeks with the team, but he's become a strong starting catcher, and is a shoo-in for a piece of the 2022 team. While I'm guessing a lot of this team's late-season success may not carry over to next year [Alcides Escobar, Yadiel Hernandez, Jordy Mercer coming out of nowhere], I do think some of the younger guys like Adams, Lane Thomas, Josiah Gray and even Keibert Ruiz will have a definite place in the Nats. I do question whether or not Ruiz is gonna stay at catcher, but...I do think the Nats have some use for him.

In terms of the other sort of tentpoles, like Patrick Corbin, Ryan Zimmerman and even Carter Kieboom......I dunno, man. Zim'll maybe be a one-year deal again, but do the Nats wanna keep relying on people like Corbin and Kieboom, who haven't delivered at all this year? How much longer are the Nats gonna wait for Kieboom to give them the big seasons he's been promising? It's a little frustrating. Soto and Bell I can see sticking around comfortably, cause they've actually put in the work this season. But it's gonna be hard to mix them with the new guard of Nats youngsters, even if Soto is still 22.

I actually have a lot of belief in the Nats' minors and youth movements. I don't know how far away they are from competing again, but I wouldn't be surprised if it was sooner than you'd think.