Triumph of the Grande Box: The Stuff That Didn't Fit 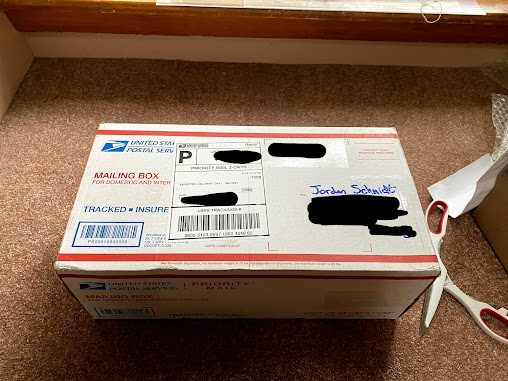 Yesterday a box arrived at my doorstep. Oh, what a box it was.

I'd been doing a number of Chris from Nachos Grande's Breakers Clubs this year, as they're fun and a good way of accumulating cards from sets I didn't have a ton of cards from. After around the fourth one, I finally decided to cash in my chips and get my earnings, which had now morphed into the contents of this very big and very packed box.

I'm gonna be going over the spoils of these breaks over the next few days. My primary team was, of course, the Yankees, but I also claimed the Phillies, Diamondbacks and Indians as supplementary teams during these breaks. Suffice to say, there was a lot of stuff I needed, and I'll be getting to those shortly.

First off, though, I wanna go over some of the stuff that I'm not sure what to do with. Pretty much everything in here is for trade for whoever wants it, though I'll again stress how inexperienced I am with trading, or just corresponding with people in general.

Okay, so...here's what we're dealing with: 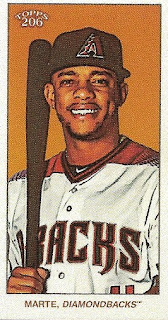 -A 206 mini from last year's online-exclusive set. Yeah, I don't really know what to do with most minis. I have a ton from one of the Pacific sets as well. I don't have mini pages, am not great with throwing them in regular binder pages and they just...sit there. This is a great card, and I believe it's a short printed back. 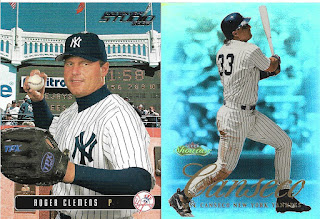 -Cards of any steroid abusers.
Yeah. This is the risk of collecting the Yankees. While I do collect Andy Pettitte, a few people in this package don't fit into my collection. The big name is Roger Clemens. Unsurprisingly, there were a ton of Clemenses in this box, ranging from the entirety of his Yankee career. And so they're just sort of in limbo. Same with the occasional Yankee card of Jose Canseco. As far as the other teams go, there were some Marlon Byrds, a LOT of Luis Gonzalezes, and a lot of other little ones.
Also, just a lot of cards of great players that I just don't collect. Guys like Darryl Strawberry, Dwight Gooden, Matt Williams, Mark Grace, Albert Belle and Tino Martinez. I probably should collect Tino, but...I don't, somehow. I know.

-Finest cards of forgettable Phils.
It's probably just the curse of this specific era of Phillies baseball, but Mike Lieberthal, Gregg Jefferies and Ricky Bottalico aren't guys I collect, as good as these cards are. 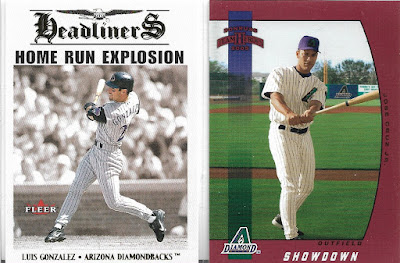 -Some inserts. This Jose Cruz is unnumbered, but still cool, and this Luis Gonzalez is a fine insert from a mid-level Fleer product. 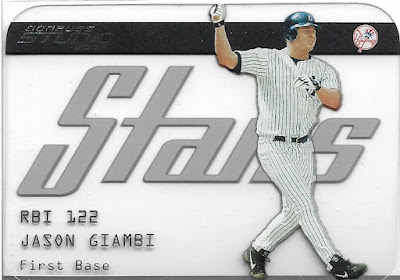 As cool as this 2003 Studio insert is, and it's even better in person, I don't have a place for it because I don't collect Giambi because of steroids. It's a shame, too. 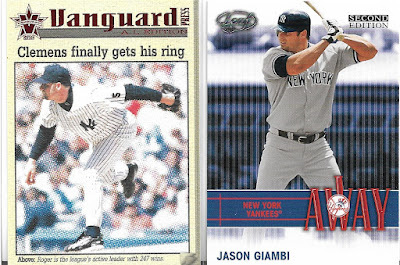 A few other odd ones. This Clemens from Pacific Vanguard is the antithesis to the rest of the set- it is flimsy and thin and pliable. I double-talked to make sure that the little page curl was part of the card.
The Giambi is a 2004 Leaf Away insert, which is at least a clever idea. 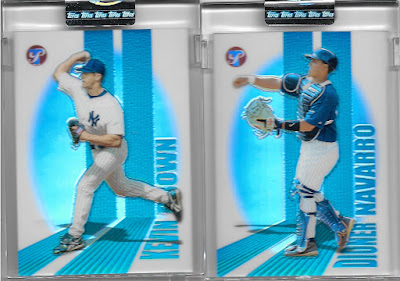 -These encased, uncirculated cards from 2004 Pristine. I have no idea what to do with these. CAN they be taken out of the casing, or are they locked in there? Cause if so, I could very clearly slide them into my binders, as they're both numbered cards- Navarro's is to 999, Brown's is to 49. And these are very cool looking cards of interesting Yankees, but I don't know if I can do anything with them as they are in cases.

Tomorrow, we'll cut into one of the other teams I claimed, and how I did with them for my collection.