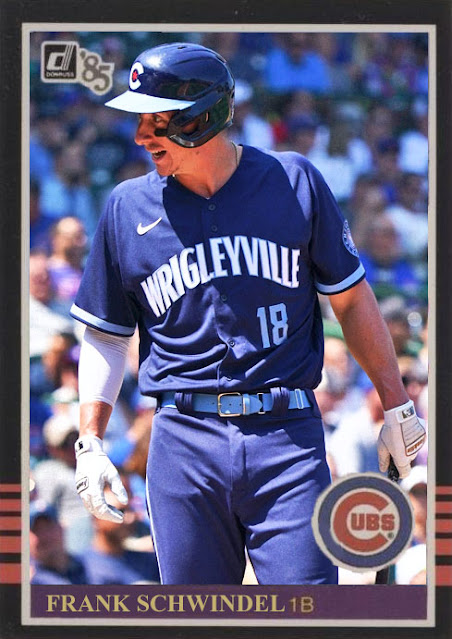 2021 has become the season of 'who?' in Chicago. Dozens of no-names covering once trusted positions. For a casual fan, or even a longtime one, this must be hell.

Frank Schwindel, for instance, was an Opening Day starter for the Royals in 2019, was released after 6 games, and didn't make the majors again until an 8 game stint with the A's this year.

However, when the Cubs made the Anthony Rizzo trade, Schwindel was in the Cubs' minor league system, and was brought up almost immediately to replace the Cubs legend at 1st. How crazy is that? The masses are torn up about losing Rizzo, and you're the one that has to replace them?

The good news is that Schwindel has followed Patrick Wisdom and Rafael Ortega in getting right to work, even as a late-bloomer. In 28 games, Schwindel is hitting .337 with 7 homers and 21 RBIs. That is a crazy amount of production for a career .150 hitter before this. Something about Wrigley just brings people back.

It's happening all over the team. Robinson Chirinos, who is the primary catcher in Contreras' IL-induced absence, is hitting .253 with 4 homers. Adrian Sampson, who last pitched for the Rangers in 2019, has been sharp in 4 appearances, 3 of them in relief. Longtime farmhand Justin Steele is now a major pitching player, with a 3.48 ERA and 4 starting appearances. Former Phillie Adam Morgan has also been very strong in relief. Longtime hanger-on Dillon Maples is having the best season of his career.

Now, granted...the team's still completely fallen out of the race, had a 12 game losing streak, and is likely gonna end well under .500. And, feasibly, the team is going to need more than just replacement players to reestablish its core. But...this is something. It's not orthodox, it's not completely proven...but it's something.

I'm interested in what the long form strategy is for the Cubs. How they're gonna spend their first few noncompetitive years. If they're gonna be based around people like Frank Schwindel, or actual minor league pieces. Next year's definitely going to be interesting.

Coming Tonight: Catcher for a team that really should have been a competitor this year.