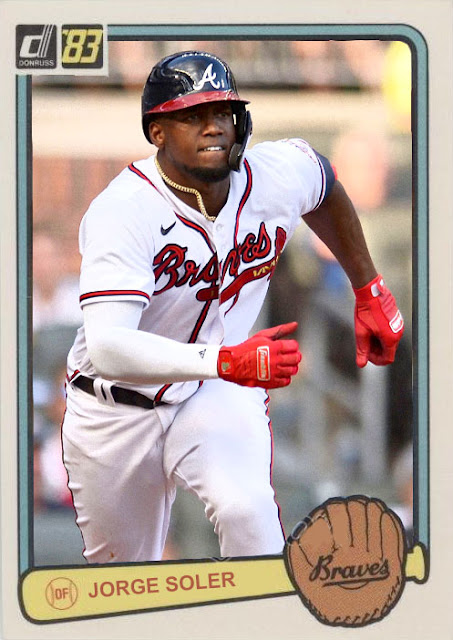 I don't know how it happened. I thought this team was looking really good before the start of the season. I thought Ozuna and Pache would pick up where 2020 left off. I especially thought Acuña would stay healthy and snag that MVP. But for all 3 to be either injured, suspended or in the minors by mid-July? Ouch. That should have been the death nell for the Braves this year, and it should have been a sign to start prepping for 2022. But...Brian Snikter persevered. And he saw a competitor in this team still, and so he just...rebuilt the outfield and they went from there.

I'll give the Braves credit- last night I was talking about the Rays' rotation being the one weak spot of the team, and possibly a factor that could hold them back in October. The Braves have a great rotation, a great bullpen, great power and contact, a hell of an infield...and now, with any combination of Joc Pederson, Jorge Soler, Adam Duvall and Eddie Rosario, the Braves have a great outfield. Rosario has been hot as hell recently, hitting for the cycle the other day. Duvall has had 14 homers as a Brave. Jorge Soler has been hotter than he was in KC earlier this year, and has hit 10 homers and is looking good. Pederson has cooled down since his big August, but is still a useful tool. And if any of those don't work, Guillermo Heredia is a great defensive pick.

So the Braves have every element working right now, and have reached the durability and versatility they've been looking for all season. The only problem is that the division is not quite theirs yet, and the Phillies still have a shot at lapping them for the East. Yes, it's a slim shot, but the Braves aren't quite as hot as they were in August, and there is a small chance they could let this go.

Though...if they make the playoffs, they have a very nice chance of getting extremely far. So it's gonna come down to these last 2 weeks.

Coming Tomorrow- He has been playing for a competitor every season since 2015, with three different teams. Still no ring, though. Will this year be the year?