Triumph of the Grande Box: The Yankees 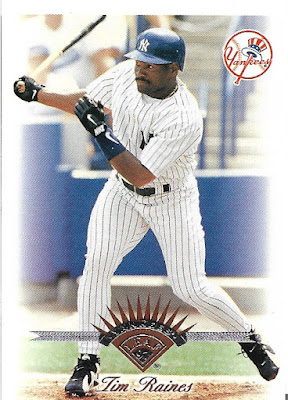 Yes. There were a lot of Yankees in Nachos Grande's breakers club box that arrived last week. Lots. And lots. Of Yankees.

Not that I was complaining. I'd signed up for them in multiple group breaks, ranging from base cards from current products to cards from 90s and 00s products I wasn't familiar with. Honestly, it was a chance to just fill a lot of holes in my collection, and this mega-box certainly did that.

I mean, first and foremost, it did allow me to add some much loved short-lived yankees to my collection. Like this Tim Raines as a Yankee issue that I did not have. 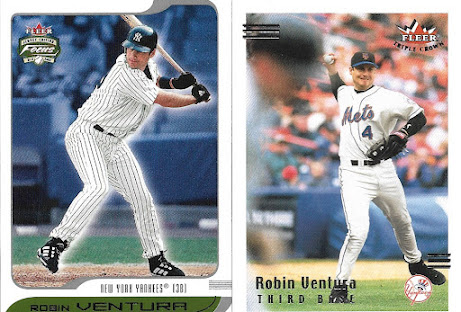 One of those fringe Yankees I like collecting is Robin Ventura, even going back to his White Sox days. I managed 2 Yankee RV's, even if one was technically a Met. There's another one coming in tomorrow's post, too.

I always enjoy pulling cards of Wade Boggs on the Yankees, cause...hey, great player, great career. I find it interesting that the logo on the Leaf Preferred card is in the same place as it is on the 97 Leaf card.

Two guys I figured I'd see more of here, but not complaining. Any Chien Ming Wang card is a success. 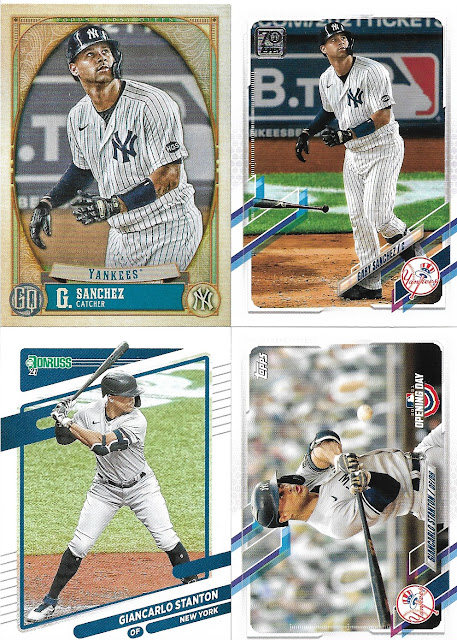 With the glut of 2021 products, there were some current Yankees, including these two, always welcome. 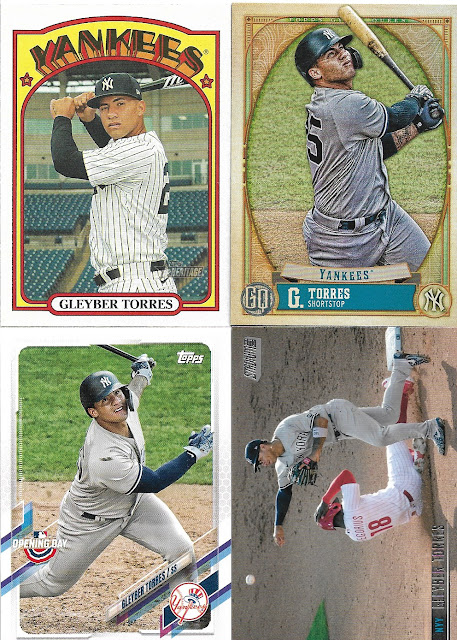 Also a great deal of Gleybers. I'm not completely over him yet, so it's nice to fill up. Also, 2021 Gypsy Queen is...a set. Are they even still allowed to call it that anymore? Where's Eisner's excuse there? 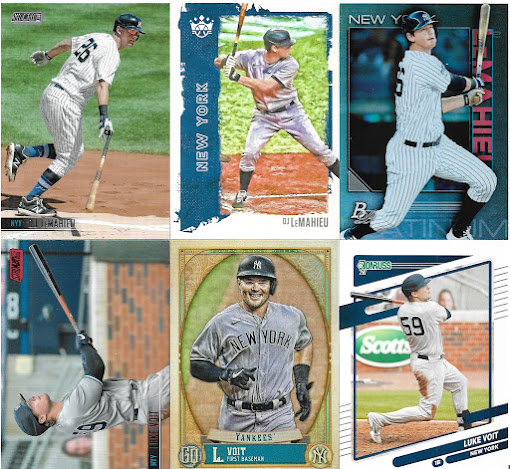 These two, who had very big 2021s, were also all over this box. LeMahieu not only appeared in a throw-in Bowman Platinum hanger, which...all those sets are new to me, I never go there, but... 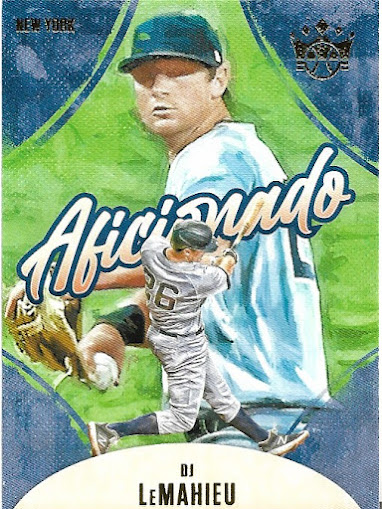 I also pulled a cool Aficionado insert of DJ from this year's Diamond Kings, which is also pretty new to me. Kinda the same as the last few, but that's Panini for you. 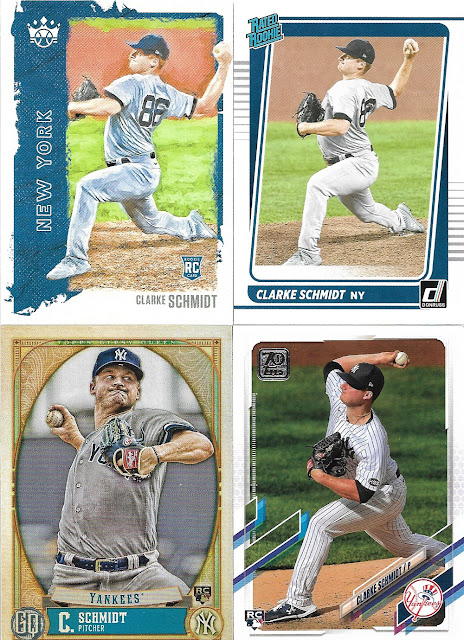 Clarke Schmidt may have been the surprise hero of this box, for reasons I'll mostly get into tomorrow. For a guy who hasn't pitched in the majors this year, he was all over 2021 products. 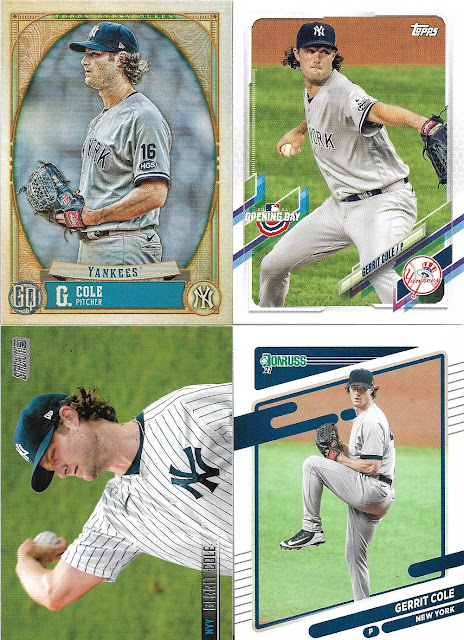 Unsurprisingly, there was a lot of Gerrit Cole here as well. I think a lot of people have forgiven him for the tack thing, and I think it's cool to like him again. That said, if Robbie Ray could have one bad start so we could finally give this bad boy a Cy Young, that'd be great. 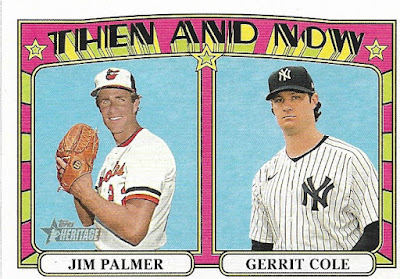 This also came from a 2021 Heritage box. Don't mind this comparison at all, though Gerrit looks a little bummed in his photo. 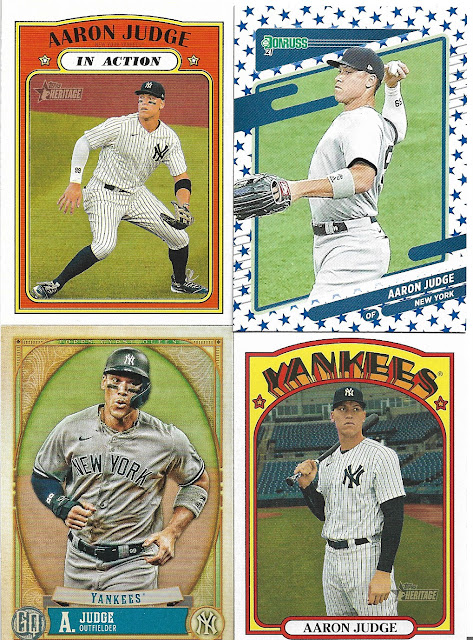 Of course #99 showed up too, not only in base cards, including a short print from 2021 Donruss... 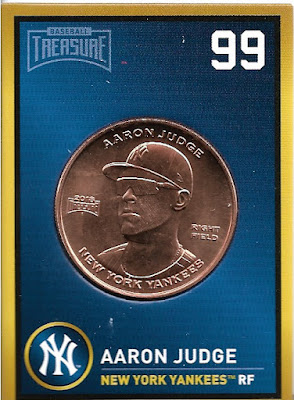 But this....very weird coin from something called 2018 Baseball Treasure, which confused even Chris. It's just...an Aaron Judge coin. Cool. Don't know how to use this in my collection, but cool beans. 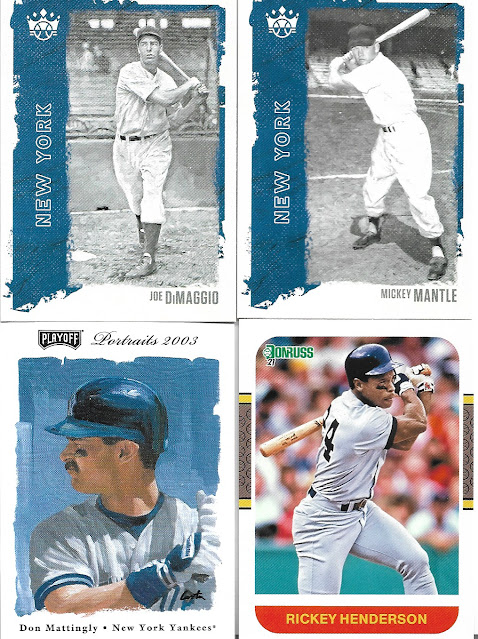 The newer projects also had some retired players. Good to see Mickey Mantle back on cards, even if Topps has him again now. That Mattingly from Playoff Portraits is also a nice one.

Babe Ruth made a few appearances, not only in an Opening Day insert, but in another 2021 Donruss short print. How very odd. 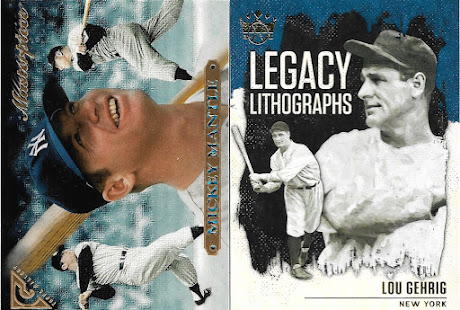 These two were the best legends inserts. The Mick came from 1997 Gallery, that one's awesome. And the Gehrig came from 2021 DK, and it's also pretty cool, especially in the design.
Alright...let's get to some of those Championship Yanks that showed up a great deal in this box... 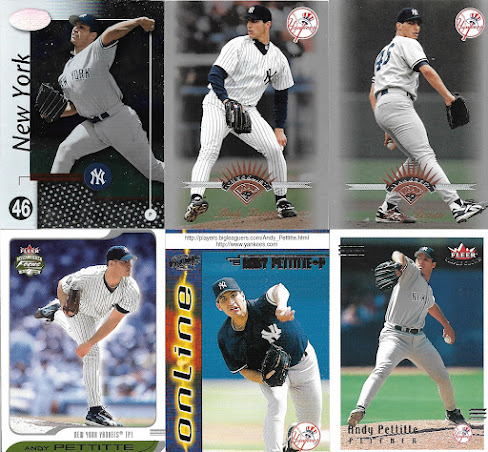 -Andy Pettitte. Unsurprisingly, a lot of him in here, including 2 different ones from 1997 Leaf. My favorite might be the 1998 Pacific Online one. Spring Training uniform there. 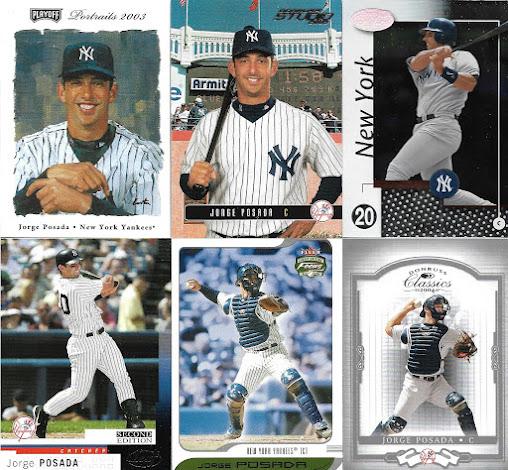 -Jorge Posada. An underrated member of these teams. I think my favorite here is the Fleer focus Jersey edition one. Full wingspan of Jorge. 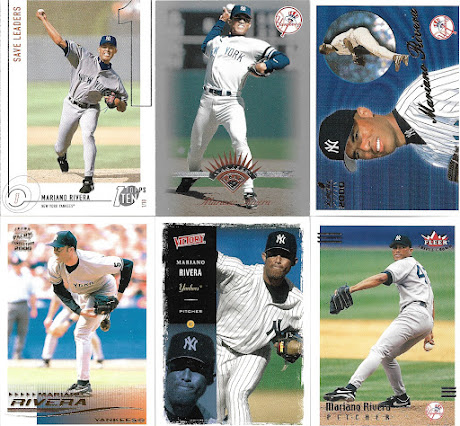 -Mariano Rivera. Was expecting a few more, but these were all worthy and necessary. How cool is that Topps Ten one. Proudly proclaiming he's the best closer in baseball. 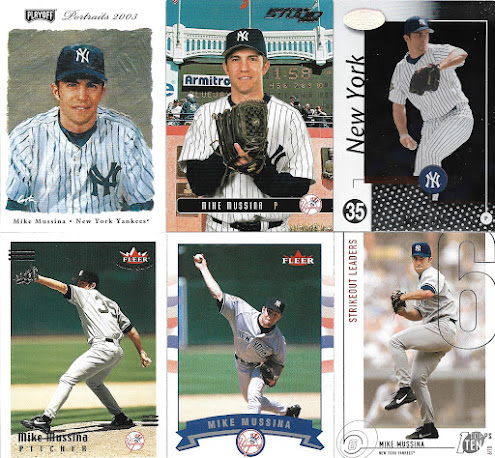 -Mike Mussina. There were a few more not pictured, but Moose was well represented. 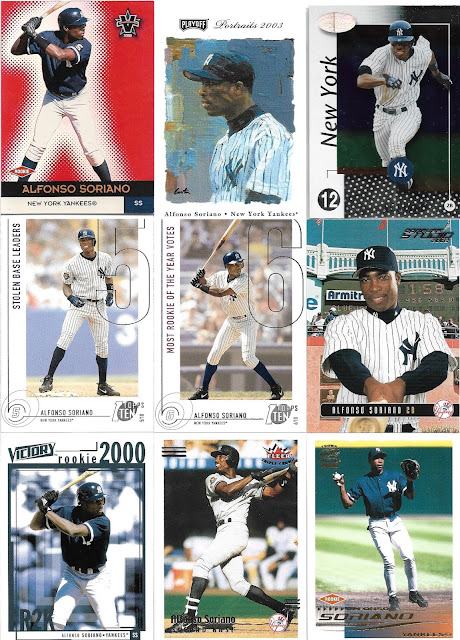 -Alfonso Soriano. I was surprised at how many Sorianos we pulled, but...then again I shouldn't be. Soriano was a huge rookie in 2000, and had some huge seasons before the A-Rod deal. So of course he's here. A few of these like the Victory, and the Crown Royale and Vanguard ones, are rookie cards. 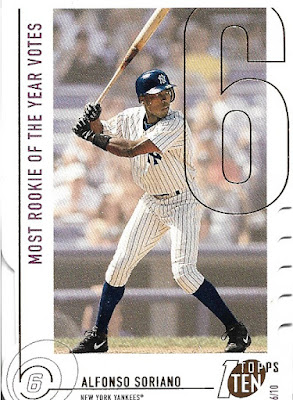 This die-cut from Topps 10 was an added bonus. Kinda like the Sabathia. 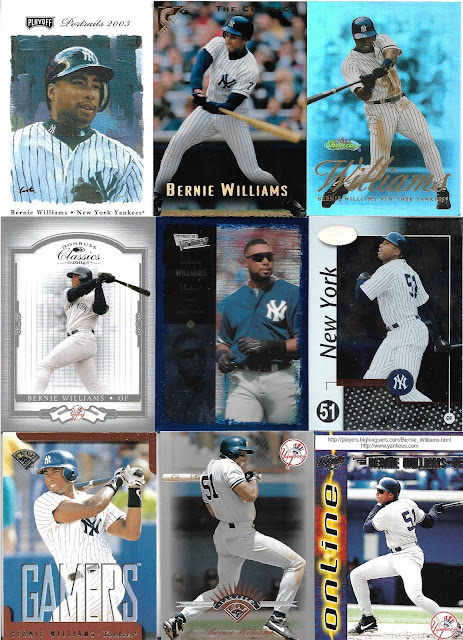 -Bernie Williams. Well, 90s and 00s boxes, so of course. Plus, I'm building my Bernie collection back up, so I'll take whatever I can get. The moment in time on the 1997 Leaf one is great, as is the 2000 Fleer Showcase one. 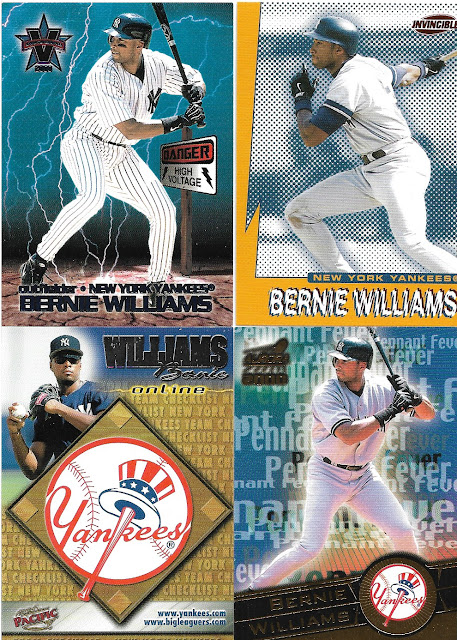 Some Pacific inserts. The return of those High Voltage Vanguard inserts. A base card from Pacific Invincible. A checklist from 1998 Pacific Online. And a Pennant Fever insert from 2000 Pacific Aurora. If anything, these breaks made me appreciate Pacific's heyday.
Of course...the winner, by no slim margin... 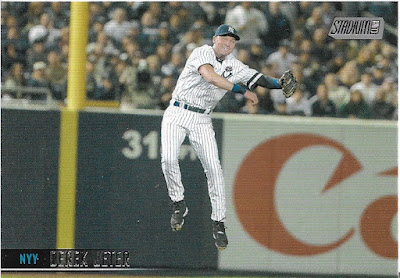 Yep. The Captain himself, the week of his induction. 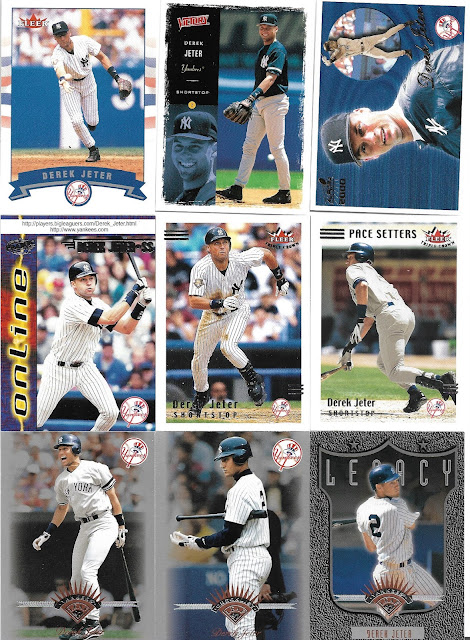 THIS BOX HAD TONS OF JETERS. The majority of them were new to me and are going into my collection. Man, these are great! The Aurora one feels classic. All the Leaf ones feel iconic, especially the bottom middle. 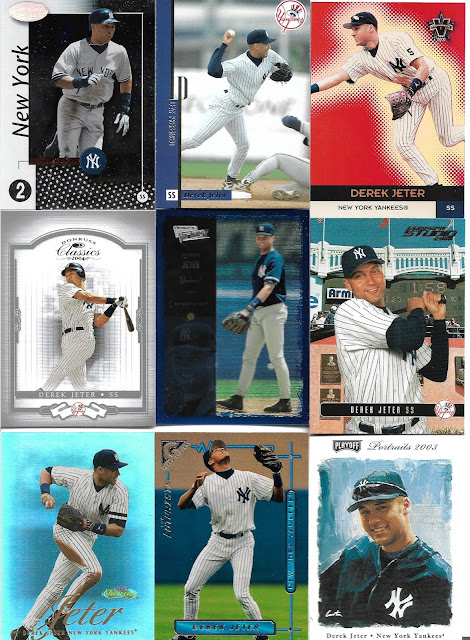 EVEN MORE. That 1997 Gallery one looks great. The Showcase scans well. It's just all awesome. 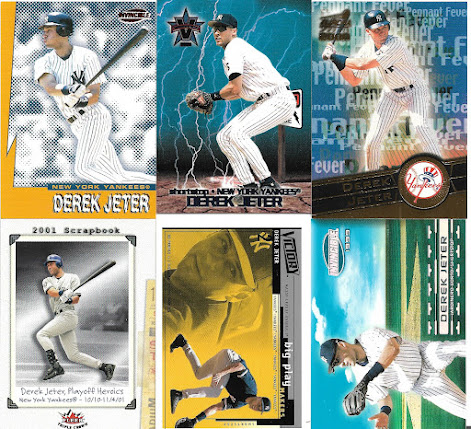 Some inserts. Top is all Pacific, as is bottom right, from Invincible. There's a Scrapbook insert from Triple Crown and a Big Play insert from Victory. And man does Jeter look good on that High Voltage. 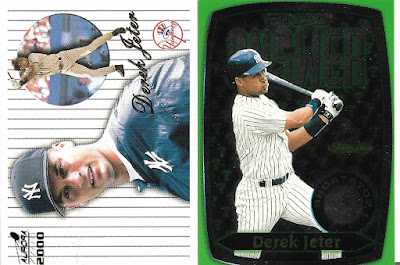 And finally, we've got a pinstripe short print of Jeter's 2000 Aurora card, and a Final Answer insert, that surprisingly doesn't scan well, from 2000 Fleer Showcase, complete with trivia questions on the back. Just really cool stuff all around, and a lot for my Yanks collection.
Tomorrow...you get to see the hits.
Posted by Jordan at 2:05 PM